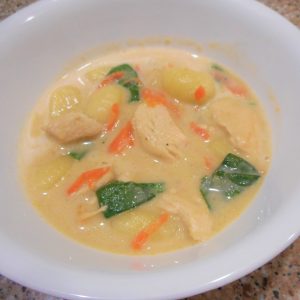 I recently sampled a version of this soup at a popular chain restaurant and was very disappointed. While the flavor of their soup was good, the chicken and gnocchi were hard to find. It was basically Cream of Chicken Soup. I decided I could do better than that, so here goes…
Oh, and if you have the time, start this recipe by making one half recipe of Potato Gnocchi and parking it in a portion of the chicken broth while you work on the rest or the soup. Otherwise, proceed as follows.

1. In a large pot over medium heat, combine 1 tsp of the olive oil and 2 tsp butter.
2. Dice the chicken into bite sized pieces, about 3/4 inch, and season with half of the salt and pepper.
3. Sauté the seasoned chicken in the hot butter mixture slowly, to cook through without browning. Add the carrots and cook until barely tender. With a slotted spoon, remove the chicken and carrots and set aside. Reserve the drippings in the pot.
4. In the same pan, heat the remaining tsp of olive oil and sauté the celery, onion, and garlic until tender. Add the shredded potato and season all with the remaining salt and pepper. Pour in 2 cups of the chicken broth and bring to a boil. Boil gently, covered, until the potatoes begin to break down. Stir occasionally. Remove from the heat and blend with an emersion blender or in batches in a conventional blender until very smooth. Return to the heat.
5. Add the remaining broth to the pot and bring to a boil, then add the gnocchi. Allow the gnocchi to simmer for four minutes before returning the chicken and carrots to the pot. Bring back to a boil, then stir in the spinach, reduce the heat to low and add the cream. If you prefer a creamier soup, up to an additional cup of cream may be added. Simmer gently for 10 minutes before serving.