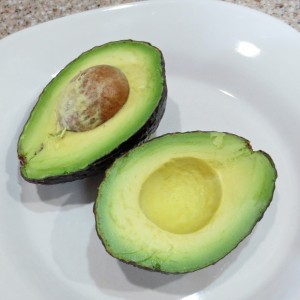 I’m so exctied! I’ve finally learned the secret to avacados, and all I had to do was ask.
I had almost quit buying avacados. I would try to select one that had dark skin, almost ripe, and some with bright green skin that would ripen later. No matter what color the skins of the avacados were, they all ripened at the same time and some would go bad before I could use them.
I finally asked the produce guy why, and here’s the answer: The store holds unripened avacados in cold storage. As soon as the avacado is brought to room temperature it ripens relatively quickly. The difference in the color of those on the shelf is only an indication of how long they have been out of the cooler, although all may have originally come from the same batch.
The avacados in the picture were both the same bright green when I purchased them. The dark one sat out on the counter for a couple of days, while the other was refrigerated.
Lesson Learned: Go ahead and take advantage of sale prices, just store your avacados in the refrigerator until you want them to ripen.