As hard as I try, I just can’t stick to a plan. For economy’s sake, I should be using what’s in my freezer and pantry, but some convergence of “good deals” or a mention of some recipe on TV gets me off track every time. This week I started off on a solid footing: Roast a chicken for Sunday dinner, then use that chicken for other meals during the week. Well, here I go again!
Sunday’s original recipe was Simple Roast Chicken. Could I keep it simple? Of course not. Sunday Roast Chicken sounded better, so off I went. There isn’t much difference in the final product, but the Sunday Roast Chicken is more work, so why did I change? 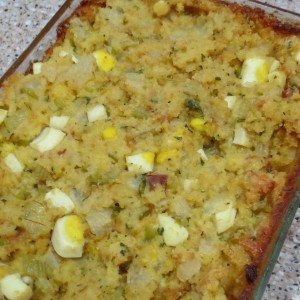 Michael had suggested we have a cauliflower dish, Low-Carb Mixed Potato Mash on the side. Nope! Cornbread Dressing goes with roasted chicken. Never mind the fact that I would need to bake a batch of both Iron Skillet Cornbread and Light and Flaky Biscuits to make the dressing, not to mention I had to stale them in a slow oven. Good thing the dressing came out well, because I wound up with four extra containers for the freezer. Why do I do this to myself?
Meatless Monday was supposed to be Vegan Red Beans and Rice from the freezer. Wrong again! I’d rather play with some of that roasted chicken. Kicked Up Chicken Enchiladas were the result. These enchiladas are on the spicy side, but easily toned down. Sometimes good things come from my impulsive behavior.

When the enchilada urge hit I had already thawed the red beans and rice. We did have them for dinner on Tuesday, so that freezer meal didn’t go to waste.
Wednesday night we were supposed to use up more food from the freezer, Stuffed Peppers. Well, I got a good deal on some marked down bell peppers in the produce department. Why should I take advantage of what I already have on hand when I can start on something new? Strip steaks and mushrooms were both on sale, too, so Pepper Steak for Two had to take the place of those boring stuffed peppers. I just slid that pepper sticky to next week. After all, they were already frozen, right?

Thursday I got back on track with individual portions of Two Chicken Pot Pie. I have several recipes for chicken pot pie, but I think this may be my favorite, at least for this week.
Friday did remain fishy with an old stand-by, Tuna Salad Salads, just a serving of tuna salad over a House Salad.  We try to have a salad before dinner most nights, so adding the tuna made Fridays dinner almost no work at all.
Today we will be going down to Aaron’s to watch the Alabama football game, so no cooking for me. ROLL TIDE!
Be thankful for what life gives you.