There’s no real recipe for Stone Soup. It comes from a children’s fable in which a stranger comes to a town in the midst of famine. All the town’s folk are hoarding what little food they have, but the wily stranger convinces them to contribute to a community pot of soup. Thus, you never know what will wind up in a pot of Stone Soup. It’s made up of whatever odds and ends have accumulated in the refrigerator or freezer. You know, a little frozen corn, a few leftover green beans, maybe some rice. Add some broth and a can or two of diced tomatoes if you like and you’ve got Stone Soup. It’s different every time.

While I did make a big pot of Stone Soup on the weekend, Sunday’s dinner was Pork Chops Diablo. These succulent and savory chops turned out to be fork tender thanks to a slow covered braise. I hadn’t made them in a while, but I’ll be sure to make them again soon.

Monday night was the College Football Championship and thus the last football food of the season. Sadly, The University of Alabama lost in the final moments to Clemson, but admittedly, it was a good game. Michael enjoyed his special pizza and I my Reuben Sandwich. It’s probably a good thing we won’t be gorging on football food again until fall. I don’t need to have to buy larger jeans. 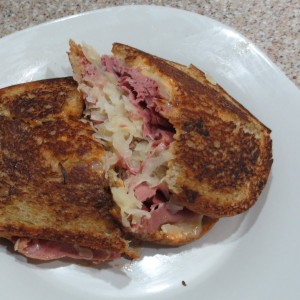 That pot of Stone Soup came in handy on Tuesday. I just wasn’t in the cooking mood. Wednesday, however, it was back to the kitchen. I had thawed a pair of Cornish Hens and they needed to be cooked. Cornish Hens with Cornbread and Ham Stuffing takes a little pre-planning, but it is a spectacular dish. Had I given it some thought, I should have invited friends to share that dinner with us. I intended to have the second bird for dinner on Thursday, but Michael surprised me with dinner out instead, so that one just slid down the calendar to Saturday, and that was fine.

It’s still grilling weather here in North Alabama. In fact, Friday afternoon the temperature here hit a balmy 72 degrees! Tuna grilling weather for us. Are you jealous? Well, don’t be, Just think of us in August when we’ll probably be sweltering at over 100 degrees. It all evens out you know.