I’m more than greatful not to be fighting the horrible snow and ice storms that some of you are facing, and I’m more than greatful not to have the worries of trying to get to work or get children to school. However, there is a down side to living in the South in the winter. On the rare occasion that we do get snow or ice, almost no one here really knows how to drive in the mess, but most of the fools who are on the roads think they do. You take your life into your hands if you get out there with them. Most of the schools and many of the businesses just close down anyway, so there’s no reason to do so.
OK, I’ll get off my soap box and on to the week’s menu.
I’m still hamming it up, literally. I’m trying to find ways to use up all the ham I baked last week. Meatless Monday we took a break from the ham and I baked a Veggie Pizza on a Whole Wheat Pizza Crust. I think the crust could have used more liquid in the mix because it was a little dry. The dough for the crust  is made and kneaded in the food processor, so it’s not easy to tell when you’ve passed the sticky stage and added too much flour.   Still, the pizza was a quick and easy change from most of our meatless meals, and it used up the last of the Pizza Sauce from last years tomato harvest. 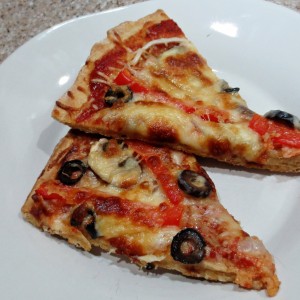 Tuesday it was back to ham with a new recipe, Ham Tetrazzini. As I often do, I split the recipe for 8 servings into three meals and froze two of them. There are no guaranties when it comes to freezing ham. I’ll have to wait and see how the Tetrazzini does.
Wednesday’s other new recipe for Cauliflower Baked Shells and Cheese will be put to the same test.

I never let a good ham bone go to waste. Fat-free Ham Broth makes use of that treasure and frees up the last of the ham that clings to the bone. I used half of the broth as a starter for a pot of Bean and Ham Soup for Thursday and the other half will go into Brunswick Stew. I never will have an empty freezer!
As I’ve been writing this post it’s been snowing a little, but so far there is nothing on the ground. The weather folks are predicting the snow will change to freezing rain and ice, and the schools that did open this morning will be closing early to get people off the road. Tomorrow it’s supposed to be in the fifties. That’s North Alabama weather for you!
Be thankful for what life gives you.