My goodness, how did that happen? I didn’t feel old when I turned 40, or even 60, but having a 40 year old daughter is something else again! There’s nothing I can do about it, though, so I might as well just be greatful that we’ve all made it this far and keep on doing what we do.
We celebrated her birthday a few days early with a dinner featuring Country Fried Steak with Gravy  with plenty of sides (and plenty of leftovers). I made the mistake of asking Emily what kind of cake she would like. Her first answer was a joke, Red Velvet Cake! If you don’t get the joke, read my post from 01/08/2015, OK, I think I’ve caught up, and you’ll see what it means. Any way, after I got thru laughing, I told her to guess again. That was a bigger mistake! She requested a Black Forest Cake, which is just as much of a treat, but also just as much work.  Oh well, once a year it’s worth it, especially for a 40th birthday.

.
Later in the week I baked one of my favorite semi-boneless hams. These hams are smaller than a standard half ham and easier to carve. I don’t know how they do it, but this version bakes and tastes just the same as the larger one. Even though it is smaller, this Baked Ham still is more than two people can eat. It was time to dig through all my ham recipes. 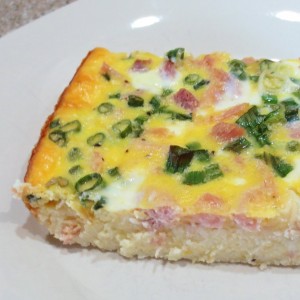 Michael always enjoys Savory Scalloped Potatoes and Ham, so those were first up. Unfortunately, scalloped potatoes don’t freeze well. That recipe only used up enough ham for one meal and one of leftovers. Three breakfast meals came from a recipe of Garlicy Grits and Ham. This casserole reheats well in the microwave. Watch out though, it’s garlicy.
A couple more ham recipes are in line for this coming week. You will be able to see the results in my next post. I don’t believe there can ever be too many recipes for all that wonderful and economical baked ham. I think I’ll go make a sandwich now.
Be thankful for what life gives you.