That’s a Question! I think sometimes we have just plain old leftovers, and sometimes we serve repurposed food. That’s the difference. As I work through this week’s dinners you’ll see what I mean.
Sunday’s dinner was White Spaghetti and Meatballs. I choose to use boneless breast meat, but thighs would work as well, if that’s your preference. This ground chicken recipe is rather anemic in appearance, but it packs a lot of flavor, and a little chicken goes a long way. One recipe makes six servings, but there are only two of us. Leftovers? 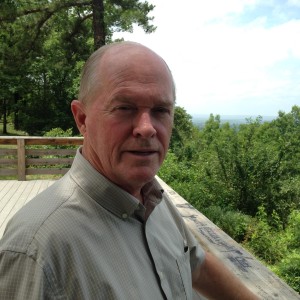 Monday Michael and I celebrated our 43rd wedding anniversary by going out for a seafood dinner. (He had no idea what he was getting himself into that day so long ago!) When it comes to seafood, I always bite off more than I can chew…Leftovers?
Tuesday I needed to be thrifty. I had recently trimmed up some pork tenderloins and saved all those little bits and pieces of meat that were too small to make a real meal but I couldn’t bear to throw away. Pork Fried Rice was the perfect recipe for those little pieces of pork, and guess what? I repurposed the leftover shrimp scampi at the same time!  I drained off the sauce and chopped the shrimp into the rice along with the pork.  No leftovers were left! 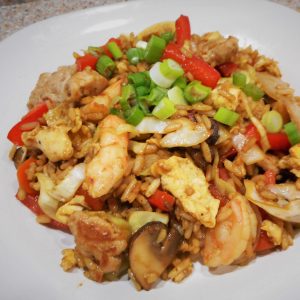 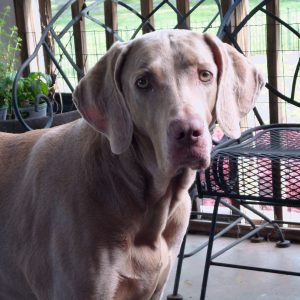 Bella’s been having some medical issues lately, so dinner was really late on Wednesday and I neglected to take any photos, so you’ll just have to take my word on the fact that our repurposed chicken meatballs were served in a much more colorful presentation that night. I retrieved half of the remaining meatballs from the original six servings and froze the rest in the original sauce for another day. A new batch of Lite Alfredo Sauce bathed the chicken meatballs along with red bell peppers, mushrooms, and onions over penne pasta for a quick but satisfying late night supper.
Thursday’s dinner was a mystery meal straight from the freezer!  I have no recipe for this one, and it’s one of those things that tastes better than it looks.  I guess after St. Patrick’s Day I mixed the very last of the corned beef with some O”Brian style potatoes and formed the whole mess into patties.  Thursday night I threw them, still frozen, into a skillet with a little film of oil and pan fried them.  They were just plain ugly!  No picture of those!  They did taste good though, so maybe next year when I make our annual corned beef I’ll try again.  That is, if I remember!
Friday was a new recipe adapted from something I caught the tail end of on TV, Spicy BBQ Shrimp. I can’t tell you exactly how the television version went, but we liked the way this version turned out. These are large shrimp that are split and stuffed with a piece of jalepeno, then wrapped in partially cooked bacon and grilled. When almost cooked, Michael brushed them with BBQ sauce. No leftovers to repurpose here.

OK. Here’s my definition of leftovers…Leftovers are those foods that are served a second time in their original form. Foods that are cooked in larger quantities than will be needed for the first meal and served in a different form in subsequent meals are NOT leftovers.
So there!
Be thankful for what life gives you.