My favorite little independent grocery store was finally driven out of business. The well known, probably largest, national retailer opened up just a mile down the road. Food Valu had been in business out here for thirty years or so. In fact, when we first moved here that store was the only one around. It was a family owned and operated store that took pride in personal service, and that service kept the little store running for a good year after the big store opened, but they just couldn’t compete. I originally promised myself that, while I would use the big store to purchase hard goods, I would not purchase groceries there. I knew what the result would be. Unfortunately, I did not keep my own promise. Although my purchases alone would not keep the smaller store in business, the rest of the local population followed suit. Independent grocers simply don’t stand a chance!

On a brighter note, I have another new kitchen toy! I recently purchased a sous vide immersion circulating cooker.  I must say, learning the ins-and-outs of this new appliance takes a bit of effort, but I’m getting there.  The first lesson learned, though, is read the recipe.  I got a bit cocky last night and just about ruined a couple of steaks.  I should have seasoned and seared the meat before I vacuum sealed it for the cooker.  I did not, and the steaks were not as juicy and flavorful as they could have been.   The pork chops that I had previously cooked, following the recommended steps, turned out perfectly!  Lesson learned. 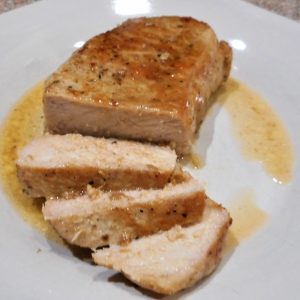 I also tried a new dessert recipe that came from FineCooking.com,  German Chocolate Bombes.  Watch out!  Having a low threshold of boredom that drives one to continuously try new things can get you in a lot of trouble!  In order to make the bombes I had to purchase some special silicone molds, and since I purchased those I was obligated to devise other ways to use them.  Thus, Chocolate Covered Cherry Bombes came to be. They use the same cake bottom as I found in the FineCooking.com recipe, but the bombe itself is much less complicated. If you don’t want to purchase individual bombe molds, the recipe can be converted from individual servings into a single larger bowl. 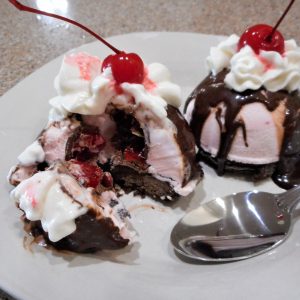 A couple of other new recipes recently entered the catalog of menu options. First up was a Zucchini Hamburger Pie. This savory selection was easy to make using my favorite refrigerated pie crust, and as good as it was, I imagine it will be even tastier when the summer zucchini and tomatoes come in. This recipe would adapt well to a vegetarian entree if the beef was left out, and perhaps a little extra mozzarella was layered in.

We also enjoyed Italian Sausage, Bean, and Kale Soup. This is another recipe that would become a satisfying vegetarian offering just by omitting the sausage. The recipe makes much more than two people can consume, but the leftovers were just as comforting a couple of nights later. The remainder found a home in the freezer.

Since Michael doesn’t really care for most fish, I have a hard time keeping “Fishy Friday’s” selection varied. It’s pretty much limited to shrimp, scallops, and tuna. Oh, and crab and lobster, but only on sale! Anyway, I’m always looking for recipes in this category. The newest was Tuscan Shrimp in Garlic Cream Sauce. This is another of those dishes that came about by combining a couple of recipes written by others and morphing them into a something else. So often, recipes I find surfing the web have ingredients or techniques that we don’t have or care for, but by mixing a few up, eliminating or adding ingredients, we have a delicious new dinner.  (Some better than others.  It’s trial and error you know.) 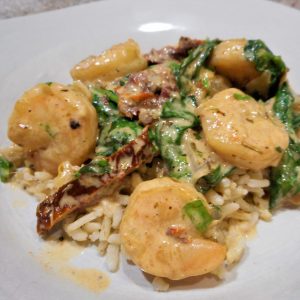 Michael and I recently celebrated the anniversary of our first date with a recreation of the meal we shared that night, “Stake an’ Biskits”, otherwise known as Steak and Biscuits, from Ireland’s restaurant. It’s simply thin slices of beef tenderloin that are seared and served in generously buttered biscuits along with fries. Simple, but good, especially when accompanied by a side of memories.  That restaurant is long gone, but the memories are not.