It’s apple time again. Now I know that apple season lasts longer than most. Strawberries and blueberries are here and then they’re gone, so you better act quickly, but apples? They hang around a little longer, or do they? Well, the calendar will tell you they do, but don’t try to tell my cooking instinct that. When it’s apple time it’s time to get moving. No excuses. So here I go! 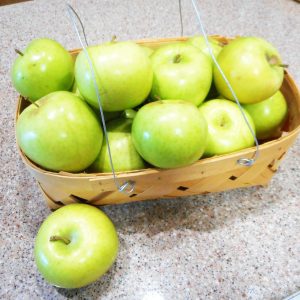 There are a couple of recipes that are a given each and every year when apple season rolls around. The first is my Apple Pie Filling. Each batch makes enough filling for four generously filled pies and freezes beautifully. A Dutch Apple Pie is always a welcome addition to the dessert table, no matter what time of year, especially when apples are no longer in season.

I also always make a slow cooker full of Apple Butter. Some gets canned in jars and some gets used in other recipes, such as my Apple Butter Swirl Bread, which was created completely by accident.  I was preparing a recipe of cinnamon rolls when I nearly dropped the log of loaded dough on the floor. I did manage to catch the dough before catastrophe struck, but decided it was best to bake the mangled mess as it was, rather than try to slice it.  Try toasting slices of this bread for breakfast and be sure to spread a little more apple butter on top. 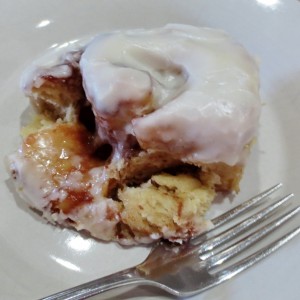 These Apple Butter Cinnamon Rolls were the intended recipe the day my swirl bread was created.  They are an extra gooey indulgence you don’t want to miss!  The recipe makes two pans of rolls, so you will have a choice to make.  You can either freeze one of the pans for later, or you can bless a friend or your co-workers with the other, thereby creating good will that will last for some time to come.  The choice is up to you!
As wonderful as apple season is, and as much as I enjoy all my apple recipes, (there are more apple recipes to come), real food is a necessity, as well. When I’m covered up with apple peels though, I do try to keep things simple. One way I do that is to share the work with Michael. Shhh, don’t tell!
Anytime rib eye steaks go on sale Michael knows he’s in trouble. I don’t often crave a steak, but that is one cut of beef I can’t resist, and Michael can grill any steak to perfection every time. Sunday’s dinner fit right in with that plan…Grilled Rib Eye Steaks.
Meatless Monday was pretty simple too, a variation of Pork Fried Rice . Since it was supposed to be meatless, I left out the pork and added edamame, and for fun I used half brown rice and half quinoa. I just can’t persuade Michael to enjoy quinoa. The little squiggles in the grain seem to bother him. I don’t know if he’ll ever get over that either, but he eats it anyway. He knows I only serve two things on the menu – Take it or Leave it.  Hunger wins every time. 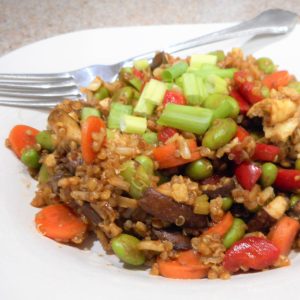 Tuesday’s dinner couldn’t have been easier, either. It came straight out of the freezer. Cauliflower Baked Shells and Cheese with Ham freezes really well and is one of my favorite ways to use that baked ham that keeps on giving. There is some pasta in the dish, but there is quite a bit of chopped cauliflower as well, so this dish is pretty well balanced and you can eat a generous portion with out feeling any remorse. That’s my kind of meal.
Wednesday we splurged and went to Michael’s favorite restaurant, Rosie’s Mexican Cantina. I’ve often wondered why Michael is so comfortable with Mexican food until one day it came to me. When you think about it, Mexican and Southern cuisines have  something in common. Namely, beans and rice. If pinto beans were served in one form or another at every meal, Michael couldn’t be happier. That’s what he was brought up on.
Thursday’s dinner had to be quick and easy so that we could attend our middle grandson, Kelton’s, baseball game. What I would call Corn Chip Chili Pie is about as close to junkfood as it gets around here. I just browned up a pound of ground beef with some onion, bell pepper, and garlic, seasoned it with a little taco seasoning, and threw in a can of chili beans. We ate this concoction over corn chips and topped the mess off with grated cheddar, lettuce, and tomatoes. Oh, and a dollop of sour cream. Maybe not so good for you, but it sure did taste good, so who’s telling? 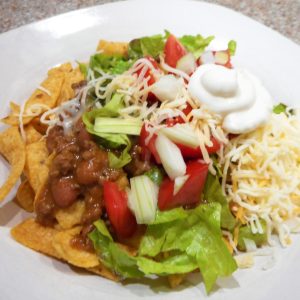 We wound up the week on a comfort food note with a big warm bowl of Alabama Coast Gumbo. That was the last container of gumbo that I had stashed in the freezer. Now, as much as I have talked about emptying out my freezers, I’m fighting a very strong compulsion to make a new batch to replenish it!
Be thankful for what life gives you.