I wonder where the heck winter has gone?  It’s not in North Alabama, that’s for sure!  I know many of you in other parts of the country have had it rough this year, but this January our thermometer registered in the seventies on eight days and only stayed below freezing for one.  Now don’t take me wrong, I’m not complaining about my personal comfort, or for that matter our power bill, but what’s up with this global warming?  It’s going to wipe soups and stews right off my menus.  (Now don’t get upset with me.  I do take environmental issues extremely seriously, but this blog is not the platform for that.)  Well, I guess we’ll just have to turn off the heat, open the kitchen door, and keep on cookin’!

Super Bowl Sunday started the week off with one of my favorite food groups, “football food”, also known as junk food in dress up clothes.  Why is it that a football game give us permission to chow down on huge amounts of fat laden proteins and carbs with very few veggies in sight?  Well, whatever the reason, we are always happy to comply.  Michael’s special pizza is reserved for the University of Alabama’s game days, so we skipped that one on Super Bowl Sunday.  Instead, I borrowed The Pioneer Woman’s recipe for Meat Pies and added my own recipe for a Meat Pie Dipping Sauce. 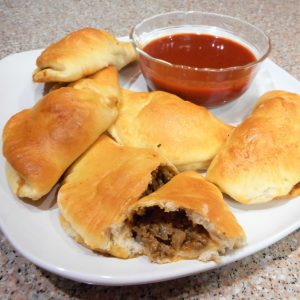 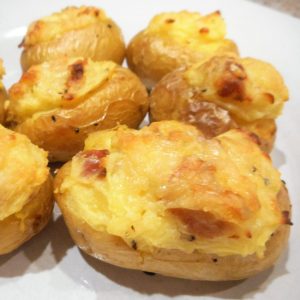 Tiny Twice-Baked Potatoes stood in place for their full sized cousins on the snack plate. Those little two bite munchies are even more delicious if you top them with a dollop of sour cream and a sprinkling of finely chopped chives, but I forgot the sour cream and didn’t have any chives.  We didn’t miss the addition.  The potatoes were delicious on their own.

A new variation on an old theme was Spinach and Artichoke Stuffed Mushrooms. There is one problem with this recipe. It makes too much! Michael and I both love stuffed mushrooms of any kind, and are often tempted by spinach and artichoke dips, but by the time we manage to make ourselves stop eating these as appetizers there usually just isn’t room for anything else. Well, we couldn’t even finish half of this stuffed mushroom recipe, as tasty as it was. Meatless Monday became leftover Football Food Monday.

Since the Grillades jumped in to save the day on Tuesday, Wednesday’s dinner was filled in by Thursday’s Frito Chili Pie.  I have no real recipe for this absolute junk food.  You just open a personal size bag of Frito corn chips, pile in some hot Chili along with some cheese and maybe a little lettuce, tomato, or onion, and there you are.  Were we on a junk food roll or what?

OK, back to the grown up world of cooking something with at least a little nutritional value. On Thursday I went back to Tuesday’s plan for Beef Stew for Two. With mushrooms and pearl onions, this is one of my favorite versions of beef stew. As I sometimes do, I left out the potatoes and served the stew in Mashed Potato Bowls. If you choose this option, go ahead and multiply the recipe. The stew will freeze well without the potatoes, which tend to turn mealy in the freezer.

We wound up the week right on schedule with one of Michael’s favorites, Bay Scallop Po’Boys. Those were on the menu last week, but the man at the fish counter had other ideas. No scallops were available last Friday. Sometimes those darned stickies have to slide a long way, but the po’boys were worth the wait.

It looks like this week will be another warm one, we’ll see.
Be thankful for what life gives you.