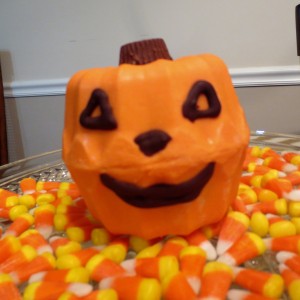 Ever since our children were small we would have chili for dinner on Halloween. Chili is fast and filling and would buffer their stomachs against all the trick-or-treat candy. It was a good plan. Now that our children are grown we celebrate Halloween with a chili supper, but it’s not always that very night. Our grandchildren have their own plans. In fact, this year Kaij and Kelton couldn’t find time at all. Xander didn’t mind though. He had the pumpkin pinata all to himself. Thus, the BANG! 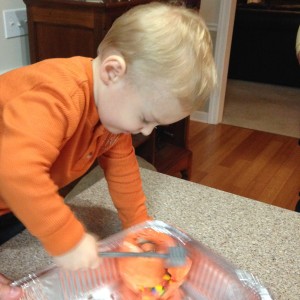 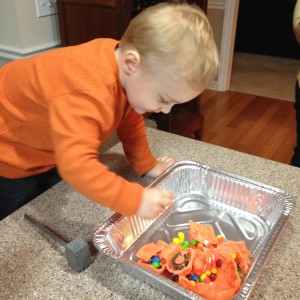 The pumpkin pinata was something new this year. I saw one on TV and decided to give it a try. As is often the case, making this little guy out of candy melts was harder than it looked. Maybe I should stick with chili.
I made two kinds of chili this year, our usual beef and bean Chili and Very Veggie Chili. Both were good.

The veggie chili was perfect leftover for Meatless Monday.  I served it with what was left of the Sweet Sour Cream Cornbread.  I think that chili is one of those dishes that is even better the next day,
On Tuesday, inspiration hit and a new recipe was created. Easy Cheesy Chili Bake is just what the name implies. With only three ingredients, one of them prepared chili, it went together in no time and was honestly delicious. I was afraid that it would be on the heavy side calorie wise, but when I put the recipe in the computer I was pleased to find the dish was just under 400 calories per serving. Diet food? Maybe not, but with a House Salad that meal definitely deserves a place on the table.
Meatball Subs were our fast food for Thursday. Both the Meatballs and the Homemade Marinara came straight from the freezer. 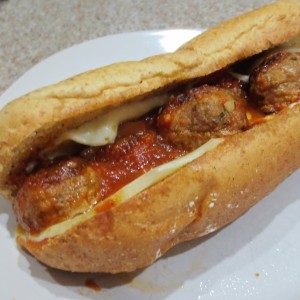 We usually keep weekday morning breakfast pretty simple, but this Friday I got the urge to make Sour Cream Pancakes with blueberries. Yummy! That night we had a re-make of last week’s Spicy Baked Shrimp. Michael had commented then that the flavor of sauce was too strong and overpowered the shrimp. He was right. Last night I cut the amount of Worcestershire sauce and lemon juice in half and the shrimp’s flavor was the star. The posted recipe reflects that change.
I got another new toy this week, a gear driven apple peeler. This little gizmo really does the job. It’s amazing! I only wish I’d had it three quarters of a bushel of apples ago. 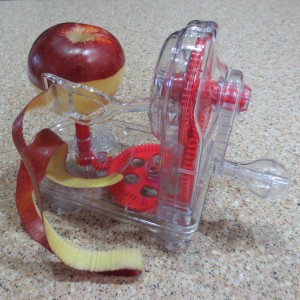 Of course, when you get a new toy you have to play. It took no time at all to peel the apples for Apple Bottom Bread Pudding with Hard Sauce. I think I’ll go have some of that for breakfast, but I better leave off the Hard Sauce. It’s only 8 AM.
Be thankful for what life gives you.