My computer Died! It didn’t just fizzle, it flat out died. No ifs, ands, or buts, and I couldn’t do a thing about it. Now I’m back with my new best friend, so let’s catch up. Quite a bit has happened.
For the first time ever for as long as I’ve been cooking I burned a pot roast, and I have absolutely no idea how it happened. That poor roast wasn’t just a little over done, it was crispy black all the way through!  The only thing I did differently was use a slow oven (300°) instead of the crock pot. Now, I’ve baked plenty of pot roasts this way in the past. Who knew?  It’s a good thing we had plenty of veggies cooked to go along side the roast that night. We just had a veggie dinner.
But I’m Getting ahead of myself…by a whole week.
Although you can’t tell by looking at the thermometer on the back porch which is still registering in the high 90’s, I’m starting to move into my fall menu items. One of my favorites is My Best Meatloaf. With a blend of beef and pork, this meatloaf is easy to prepare and turns out exactly the same each and every time. It’s my go to recipe for meatloaf, and while it makes more than I need for dinner for two, I go ahead an bake the whole thing rather than freezing half. I have plans for those leftovers. 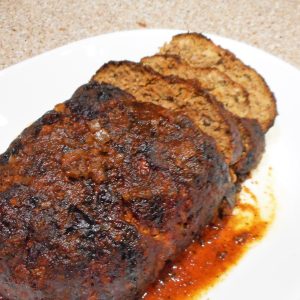 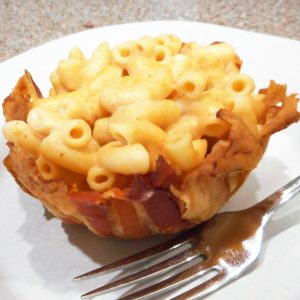 The one drawback to meatloaf is that it’s kind of hard to make gravy if you like mashed potatoes along side. One way around that is to serve Mac and Cheese in a Bacon Bowl instead. The Bacon Bowls take a little patience, but they sure are fun, especially if there are kids around. None of the grandchildren were here this time, but I’m going to try to remember to fix these for them the next time they come. (Note to self: I think thick cut bacon might work better.)
Meatless Monday was perhaps my favorite meal of the week. I’m drawing a blank on where the recipe came from, it wasn’t mine, but we had Jalapeno Popper Quesadillas.  Even though these aren’t diet food by any stretch of the imagination, I’ll be sure to prepare them again!  I can make up for all those cheesy calories somewhere else.  Maybe the heat in the peppers will burn a few of the calories off, do you think?  I did use spinach tortillas and we ate a big House Salad first, as well as Salsa Rice and Refried Beans on the side. 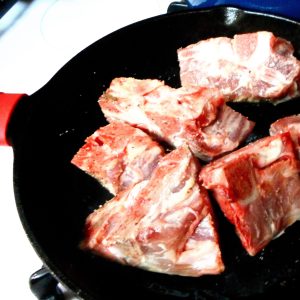 My Yankee relatives would think I have lost it if they saw me happily buying  pork neck bones on sale last week for 99 cents a pound. Yes, I said neck bones. You think I’m crazy, too, right? Well, those bones make the most flavorful broth. You use chicken broth and beef broth all the time. Why not pork broth? As a bonus, the neck bones yield quite a bit of meat that can be used to flavor up beans and such. OK, confession number two: I guess I should have saved those tidbits of pork for the pinto beans, but no. I tried to get creative. Pork Ravioli anyone? Don’t try this at home! As Michael said, those ravioli tasted dead! Maybe it was the spice blend, but that idea went straight to the trash. You can’t win them all. At least I have some excellent pork broth in the freezer.
Friday’s dinner was one I haven’t shared with you before, Pork Rind Crusted Sea Scallops. This dish uses a decidedly Southern ingredient, fried pork skins, as a breading before the scallops are pan fried in just a bit of butter and oil. Using the pork rinds adds a very subtle pork flavor that doesn’t overpower the sweetness of the scallops in the way bacon or prosciutto does.

Another successful addition to our selection of football food was Bacon and Two Onion Ricotta Cheesecake. Since it is usually just Michael and I watching the Alabama football games, I divide this recipe into three portions and freeze two for future dates. We do enjoy watching the games by ourselves without interruption.  That way we can concentrate on the game.  Does this make us anti-social or just fanatical? Hmmm, I’ll have to think about that.
Be thankful for what life gives you.