That’s something I can remember my Grandmother saying, and it seems to apply this week. While I got a lot accomplished, I was too far behind to post on time this morning. Please excuse me.
This is one of my favorite times of the year because of the abundance of fresh produce with which to stock my freezer. It is a LOT of work and rather time consuming, but I look forward to it just like Beach Week or the Christmas Holidays. This year’s weather has increased the bounty. I should have started weighing the tomatoes as Michael harvested them. I think we’ve gotten more this year than any year in recent memory and they are still growing like crazy. The same for the blueberries. I’ve been trying hard to use up last year’s crop, as you can tell by all the blueberry recipes. I hope I can find some good local squash next week, and maybe corn and green beans, but I’ll have to see. I usually bite off more than I can chew.
Last week’s menu went pretty much according to plan. I knew we were going to be gone quite a bit, so dinners were mostly quick and out of the freezer.
Sunday we did enjoy grilling. Michael grilled Quick Brined Pork Chops, Grilled with Rib Rub, but we substituted a tenderloin for the chops. Brown Rice and Lentil Pilaf was on the side.

Meatless Monday I wanted to play some more with the Potato Gnocchi that I had frozen the week before. Lesson learned: believe the recipe when it instructs you to add the frozen gnocchi to the boiling water very few at a time or they will fall apart. I found it most effective to only add one at a time until there were several in the pot and fish each one out as it rose to the surface, then add another. This method didn’t really take any longer once I got started. The gnocchi were served in Summer Veggies with Gnocchi. 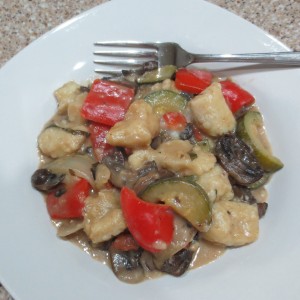 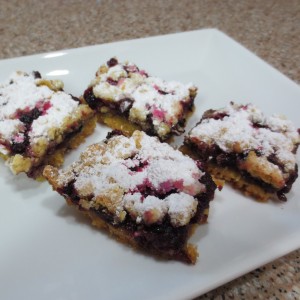 Six cups of last year’s blueberries were turned into blueberry preserves. I just followed the recipe on the SureJel package and it turned out well. Some of those preserves then went into a new recipe, Double Blueberry Lemon Bars. Those didn’t last long!
Tuesday I pulled some Taco Seasoned Beef out of the freezer and we had Taco Salad Our Way. I also made a batch of my Guacamole for Two intending to use it as a topping, but after I took a picture of it, the Guacamole disappeared. Hmmm? 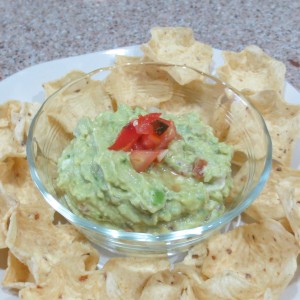 We were gone all day on Wednesday, so after a House Salad we had Not So Sloppy Joes, again out of my freezer stash. That freezer sure comes in handy sometimes!

Thursday we enjoyed dinner out, and then it was the dreaded Fishy Friday! I love almost any kind of seafood, but Michael is more selective. He doesn’t want anything that smells or tastes “fishy”, so he’s a challenge. Since last week’s attempt at lobster rolls was such a failure, I had to come up with a bribe to get him to let me try again. I combined two of his favorites, Lemon Meringue Pie and Blueberry Pie. Thus, the Blueberry Lemon Meringue Pie. The pie was really tasty, but I think I’ll leave lobster rolls to you in New England! Be thankful for what life gives you.