Lately, Bella has had to go to the vet for ear infections and it terrifies her. Somehow, this 89 pound scaredy-cat has managed to climb up onto this little end table to “hide”. It was almost like she was telling Michael “Maybe they won’t find me here!”  It didn’t work. The vet found her anyway and treated her just where she sat.
Bella didn’t have a very good day, but all in all it’s been a good week.
We enjoyed going over to Carol and Randy’s to meet Blake.  He sure is cute!  Carol put on quite the spread, but my favorite was Carol’s Chicken Salad. I had her give me the recipe to share with all of you.

We got home in time to watch the Alabama football game.  Roll Tide!  After the game, Michael had to have his pizza and I splurged on a Reuben Sandwich. I really shouldn’t have done that after all I had eaten at the party, but it sure was good.
Sunday was rather quiet for a change. In my effort to use up some more of my freezer food we just had Meatball Stroganoff. It’s a lot more tasty than this photo makes it look. 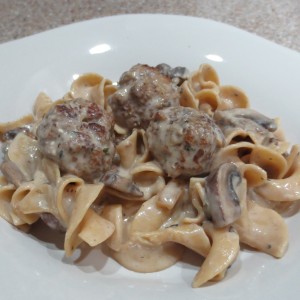 Meatless Monday’s dinner also came from the freezer. We had the last of my Whole Grain Stuffed Poblanos. They are a little different than the traditional stuffed peppers but very flavorful and filling. The recipe makes six, so that’s three meals for the two of us. Luckily the peppers freeze well, even with the cheese sauce. Just thaw and bake; my kind of meal.
Tuesday’s Taco Salad is sliding to next week. Both the the Taco Meat and the Refried Beans are already in the freezer as well, so sliding that stickie wasn’t an issue. Guess where we ate instead? Yep, Michael’s Mexican.
Wednesday I finally made Carol’s Chicken Salad and it turned out well. I saved the bones to add to the pot the next time I make my Rich Chicken Stock. Adding them in extra will just make the stock that much richer. I guess I’ll never have an empty freezer.
Thursday’s freezer food was Shepherd’s Pie. I’ve never taken the time to write down the “recipe” but maybe some day I will. My Shepherd’s Pie is just a good way to use up leftover pot roast. I dice up any leftover carrots and celery, add a few peas, mushrooms, and anything else that strike my fancy and dump it in a baking dish (often disposable foil). I top that with shredded pot roast and gravy, then spread mashed potatoes over the top of it all. Most of the time there are enough leftovers to make two, so one goes into the freezer and we have the other later in the week. Shepherd’s Pie is another of those dishes that taste better than my poor photos make them look.

Fishy Friday was great! We had Artichoke, Shrimp, and Mushroom Casserole served over brown rice. We ate early, and even skipped our salad course, because Kelton had a baseball game and that’s what grandparents do. Be thankful for what life gives you.