I hope all of you had a good Mother’s Day. I did! My four-legged children gifted me with a much needed food processor (with Michael’s help). I think they had an ulterior motive. My old processor quit, and it’s hard to make their Dog Treats without one. Michael offered to take me out to dinner, but instead I requested that he fire up the grill for one of my guilty pleasures, bone in rib eye steak. I ate the whole thing!

Along with the steaks we enjoyed loaded Twice Baked Potatoes and Creamy Leeks Parmesan.

A slice of Chocolate Covered Strawberry Pie sent me over the top! Michael manned the grill, and all of the sides, including the pie, came our of the freezer so I didn’t have to lift a finger. Pure luxury!
On Tuesday we learned the hard way that there are still some honest folks left in this world. We were supposed to go to one of Kelton’s ball games. After fighting rush hour traffic for nearly an hour we were pleased to find a prime parking spot. We started gathering our things together and Michael suddenly went into panic mode. Both his wallet and phone were not in place and he realized exactly what had happened.  Before we could pull out of the garage at home Michael had to move a ladder that was in the way. In doing so, he laid the wallet and phone on the back of the car. He would remember to pick them back up, right? Wrong! Worried about the time and traffic, we just pulled out of the garage and went on our way. We knew both had to have fallen off of the trunk and onto the road somewhere along the way. The odds of finding them again were slim to none. Phones are a pain to replace, but his wallet would be worse with his driver’s licence, other ID cards, and credit cards that would all have to be cancelled and replaced. Between the two items, identity theft was just waiting to happen! To make a long story just a little shorter, I called Michael’s phone and it was answered. Some honest man and his children had found both the phone and wallet and were trying to return them to the house, but we weren’t home. He waited until we could get back to Huntsville and gave them both back without a thing missing. Michael was happy to reward him with more than just words. Thanks to his honesty a disaster was averted and we are truly thankful, not only for his action, but for the example he set for his children.
OK, on to strawberry season.
This year’s fresh strawberry crop purchased from Brown Farms (4 Gallons) yielded, among other things, a batch of strawberry ice cream,  Strawberry Cupcakes, and a couple loaves of Strawberry Bread .

Over the two weeks we enjoyed two versions of Fresh Strawberry Pie, along with Chocolate Covered Strawberry Pies to stash in the freezer. 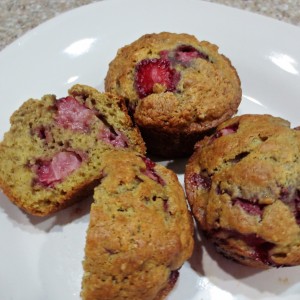 Strawberry Muffins finished the cooking efforts. Most were frozen. I also packaged up some strawberry puree and sliced strawberries for the future. Nothing was wasted.
While I was up to my ears in strawberries, dinner was mostly freezer food but a couple of new recipes came up.

Spinach Salad Supreme is nothing new, but it was good to document it in the computer. Chicken Tortilla Casserole is still a work in progress. Sometimes it’s hard to lighten a recipe up without losing the flavor. Personally, I would rather eat a smaller portion with a lot of flavor that stuff myself full of cardboard. Lately, Michael has been drawn to Cajun combinations with chicken and shrimp. Friday I came up with a new recipe along that line, Cajum Shrimp and Pasta. I haven’t finished writing all the recipe’s details yet, but I’d like to get this post published, so I owe you one. 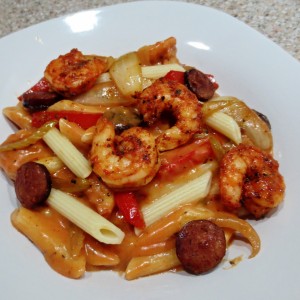 Mother’s Day only comes once a year, and each fruit has its’ own short season, but I hope there are still a lot more honest folks in this world. Be thankful for what life gives you!