I’m worn out. Forth of July weekend was a lot of work, but it was a lot of fun as well.
I cooked for a full week in preparation, so our regular weekly dinners were mostly from the freezer, but in no planned order.  Freezer food comes in handy from time to time. I tend to rely on one-pot type of recipes that only require the addition of some pasta or rice.

My Mushroom and Pork Skillet Dinner is good with Italian gigli pasta. Meatball Stuffed Mushrooms pair well with Homemade Marinara Sauce over linguini or whole grain spaghetti.  Another Brown Rice Pilaf cooks up quickly and works well with my Artichoke, Shrimp, and Mushroom Casserole, and Grilled Vegetable Lasagna requires no addition at all. 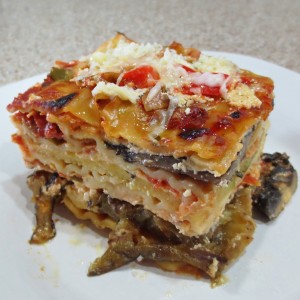 Now, on to the big weekend!
The first to arrive on Friday the Forth of July were Aaron, Jen, and Xander. We were later joined for dinner by our friends Cindy and Jack who live near Jacksonville, MS. We don’t see Cindy and Jack very often and we all enjoyed their visit. Friday night’s dinner was fairly simple. I tried to have it all prepared in advance.
We started off with Aaron’s Pimento Cheese and my Spinach and Artichoke Spread. I guess I should have offered some healthy appetizer, like a vegetable tray, but I didn’t. It’s a Holiday!  For dinner itself, Michael grilled our Best Beef Burgers, which were served with Power Pasta Salad and the usual Slow-Cooked Baked Beans. I pulled a Chocolate Covered Strawberry Pie out of the freezer to finish our dinner off.
I knew Saturday morning would be hectic, as our larger celebration would start that afternoon at 3 PM and every minute before that would be needed to be ready. Earlier in the week I baked a loaf of Blueberry Zucchini Bread so the early risers would have something to nibble on while the Bacon and Hash Brown Egg Bake was in the oven. The zucchini bread was a disappointment. In my haste, I pulled it out of the oven too soon and the center was gummy. Some folks thought it needed to be sweeter, as well. The hash brown casserole, however, was good. On a whim I used southwestern style has browns rather than just plain ones. It was very flavorful. Maybe the dish would have been a bit much for 6 AM, but our stomachs were already awake by the time it was ready and we enjoyed the extra seasoning.

As soon as breakfast was over, dinner preparation began in earnest. Most of what I served has been posted on The Sticky Menu Plan in the past, so here’s the menu:
Aaron’s Pimento Cheese and my Spinach and Artichoke Spread
Betsy’s potato chips and onion dip
Pulled Pork Barbecue with Rib Sauce and Big Bob Gibson’s White Sauce
Squash Casserole
Creamed Corn
Emily’s Potato Salad
Low Guilt Mac and Cheese
Coleslaw, Krazy Jane Style
Betty Crocker’s Red White and Blue Layered Flag Cake
Vanilla Bean Ice Cream
The meal went well, but we comlpetely forgot to grill hotdogs for the kids and I found the unbaked squash casserole in the back of the refrigerator the next day. Oh well, everyone had plenty to eat and seemed to have a good time.
We didn’t do fireworks, but my sister, Betsy, provided plenty of color by bringing beautiful flowers from her garden and for entertainment the boys had a box. Yep, a box. What more do little boys need?
Be thankful for what life gives you.